Floods are mainly caused by naturally happening changes in the height of oceans, rivers, and lakes. Floods are the most common natural threat in the country and among the costliest according to Public Safety Canada. Historic floods have happened across Canada, with several of the worst occurring on key river systems that pass through populated zones. Scientists predict that flooding linked to the effects of climate change will increase as the 21st century progresses, especially in coastal zones of the country.

Why Do Floods Occur?

The core cause of river flooding is excessive runoff following heavy rains. The runoff rate can be increased by urbanization (the alteration of open land to water-resistant surfaces such as buildings and roads etc.) and by elimination or alteration of vegetative cover (i.e. water runs off cropland faster than forested land). Runoff is also increased by snowmelt in early spring. If about Canada, the peak flood season is spring.
Ice jams can also be the reason for floods when upstream water is jammed by accumulations of ice. This often happens at a constriction point in a river, for example, a bridge or a narrow channel. Heavy storms can cause floods in the summer months, particularly in small watersheds.
In floods caused by snowmelt and spring runoff, a river usually rises slowly, letting time for the building of temporary defenses or evacuation. If we compare, in storm floods water can rise pretty rapidly. Likewise, when an ice jam breaks up, the resulting rush of water can be very fast.
High-water problems also happen in lakes, but typically the rate of fall and rise of the lake’s water level is much slower than on rivers. Damage to shoreline installations and cottages is not unusual on the Great Lakes as well as others.
Coastal flooding may be caused when storm activity expands seasonally high tides or when a tsunami made by an earthquake, is driven ashore. Tsunamis occur seldom on the West Coast. Coastal flooding associated with hurricanes occasionally occurs in Atlantic Canada. Scientists warn that these hurricanes may become stronger as sea-surface temperatures warm because of climate change.
over-all, extreme weather events related to flooding are expected to increase with climate change and Canada and other countries may face even larger and more frequent floods in the future.

Most of Toronto is at risk of flooding?

Urban areas are at risk of flooding because they are usually formed around rivers, lakes, and harbors. Extreme climate conditions such as heavy hurricanes, rainfall, melting snow, and ice are the most common reasons for flooding in a city. Augmented urbanization also contributes to flooding in cities. As a city progresses, the ground gets covered in pavement, concrete, and other materials that avoid rainwater from seeping into the soil and contribute to overflowing storm sewers. We can lessen flooding on downtown streets by making more naturalized spaces like green roofs where rainwater can be absorbed instead of running into storm sewers.

Hurricane Hazel swept through Toronto with unparalleled force in 1954. Though Toronto is no stranger to flooding, the first written account of a flood was in 1797 and various were unprepared for the destruction this storm caused. On October 15, 1954, Hurricane Hazel happened to Ontario. Within 24 hours more than two hundred millimeters of rainwater had fallen over the city. The Humber River and Etobicoke Creek watershed, as well as Holland Marsh, were the maximum affected bodies of water. These areas started to overflow and an excess of rainfall devastated communities, parks, roads, and public utilities. As an outcome of the storm, 80 people lost their lives and thousands were left homeless. It is assessed that a storm of this magnitude today would cause approximately $1 billion worth of damage.
A thunderstorm in Timmins in August 1961 made Town Creek flood, destroying homes and roads in the city and killing 5 people. In May 1986, flooding on the Winisk River near Hudson Bay wrecked the Weenusk First Nation townsite and killed 2 people. The community resettled on higher ground near Peawanuck.
The Great Lakes have been hit by major floods when storms and high-water levels overlap. Over the years, damages because of shoreline flooding and erosion have experienced hundreds of millions of dollars in damage. The most severe Great Lakes floods happened in 1952, 1972–73 and 1985­–87.
In August 2018, a thunderstorm formed 72 millimeters of rain over Toronto with 51 millimeters falling in just 1 hour. The rainfall caused extensive flooding across western and central portions of the city and resulted in over $80 million in insured damage.
According to Catastrophe Indices and Quantification Inc, severe climate across Ontario has caused nearly $1 billion damage in 2018, A big part of this amount is because of an initial May windstorm that produced over $500 million damage. The costliest insured severe weather event of all time for Ontario remains the 2013 Toronto floods, which caused nearly $1 billion in damage.
The August storm caused in flooding at Toronto's City Hall, in parts of Union Station, in the Scotiabank Arena during a concert, and in the Rogers Centre parking garage, additionally, water soaking through the Rogers Centre roof during a baseball game. Several underground parking garages flooded, and there were abundant reports of the submerged flooded basement, vehicles, and sewer backups.
The vice president of IBC Ontario, Kim Donaldson said that the recent Toronto flood is yet one more instance of an increase in severe climate events across the country. As a direct outcome of climate change, these flooding events are happening more frequently and with greater intensity, with escalating prices to both taxpayers and insurers.
Flooding can cause more damage in a very short amount of time. It is critically significant for consumers to know what their policies cover and whether they offer sewer backup or overland flood protection. Sewer backup coverage is broadly available as an add-on to major standard home insurance policies. Overland flood protection is available across the province from many insurers. People who live in areas prone to regular floods may run into difficulty discovering affordable coverage. Consumers should check with their insurance representatives to get what options are available to them.

As described above, flooding in Toronto causes severe damages and destroyed homes, roads, basements, etc. after flooding, water restoration is the main thing that is to be considered which includes flooded basements cleanup, emergency plumbing services, and mold removal, etc.
Torontoflooding.ca offers services for water damage restoration to help in solving problems caused by floodwater. Basement flooding is a problem we see frequently and fixing the problem that leads to the flood is only part of the task, we also help take care of the flood cleanup tasks and flood water.
After a flood occurred, water restoration services will help to prevent additional problems that will be produced by standing water or wet basement conditions. Water in the basement causes mold so the first thing we must to remove is all water and moisture during flooded basement cleanup. Not only is a rapid response to these problems is significant, but solving them once and waterproofing for the basement is the next logical step.

Wet basements can cause:

Torontoflooding.ca provides the best services in flooded basement cleanup to minimize all kinds of risks created by it.  While the emotional toll can be sometimes unmeasurable, flood damage can also be a huge financial burden. The more you wait to deal with a wet or flooded basement the harder it is to deal with it.
If you are facing flood damage, you can trust Torontoflooding.ca’s professionals to take care of your water damage restoration rapidly and efficiently. We are among the leading water damage restoration companies in Toronto featuring 5-star service and affordable best rates.

Fans sit on the floor in a wet basement and help in the evaporation of floodwater. The quicker you act after a flood the better you will be able to reduce water damage in your basement.
After a flood has occurred, our technicians will set up a special pump that removes any residual water in the basement. Furthermore, getting rid of water by sopping it up with mops or rags is useful in some situations and a common first step that homeowners will do during flood restoration. Once we have done our best to remove all water, the next step is to make an environment for the remaining water to evaporate. This is done by moving any furniture or belongings if required before carefully installing advanced drying apparatus, for example, special fans and dehumidifiers. These pieces of equipment serve to further remove all remaining water within your basement, allowing us to dry your basement in a short amount of time.

It is important to dry the wet basement as much as possible while basement mold is a serious problem after a flood. Finding a solution for mold in the basement after a flood is a big deal. Preventing the expansion of mold will remove the need for mold removal services down the road. Usually, this is partly done by removing the lower sections of drywall which were soaked by the floodwater. Our water restoration professionals will carry out remediation services containing steps such as removal of damp drywall sections to make sure that there is nowhere for the water to hide.

Finally, we leave a clean basement by eliminating any garbage or wet materials and leave your space ready to be reconstructed. Our experienced team will manage your flood cleanup with a complete basement cleaning to make sure that your basement is not only dry but clean as well.
After flooding, Flood damage restoration can take some time and planning, it is critical to have professional services on your side with better experience and knowledge. A clean basement will be all that is left when the water remediation service is done.

We are ready to offer our services whenever you have a plumbing emergency in the City of Toronto. Just contact us and our customer care team will have an emergency plumber to your home as soon as possible to evaluate, repair, and provide additional clean-up support if needed.
We deal with following common plumbing emergencies:

It takes a specialized apparatus and training in order to perform suitable commercial plumbing. Torontoflooding.ca is equipped to handle the biggest and more complex tasks within the commercial plumbing sector. We know all of the basic requirements and can work with you to schedule annual inspections and maintenance and help you to keep your property code-compliant. We can also manage the installation of water supply distribution points in commercial buildings.
Additionally, there is quite a broad range of recreational facilities throughout Toronto. We have experience in maintaining, servicing, and installing plumbing systems for these facilities. Whether it be a gymnasium, community park, center, or public swimming pool, we are ready to manage all of its water supply and waste disposal requirements. These facilities may service hundreds or thousands of inhabitants, and the plumbing must be up to par to keep the atmosphere clean, safe and healthy. Torontoflooding.ca is available 24/7 to provide all the water restoration services for any city community or recreational manager.
Posted by Flooding Toronto Water Damage and Mold Removal at January 08, 2020
Email ThisBlogThis!Share to TwitterShare to FacebookShare to Pinterest
Flooding Toronto, Toronto flooding causes water damages
Toronto, ON, Canada Toronto, ON, Canada

Toronto Flooding Cleanup Floods can cause extensive damage to your property. The flooding damage doesn't just occur during the flood ... 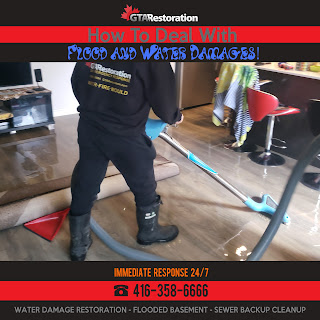